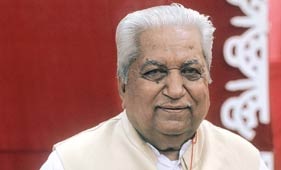 A karyakarta from the RSS, Keshubhai Patel, popularly called Keshubapa, (father), was among the founder members of the Bharatiya Jana Sangh (BJS), the political party rooted in the Sangh launched in 1951. He was its president from 1972-75, and was among those witnesses of history who saw the merger of the right wing BJS with the Janata Party in 1977 and the launch of the BJP in 1980.

Keshubhai became the Chief Minister of the first BJP government in Gujarat in 1995.

Keshubhai, a Leuva Patidar (Patels), was born Keshubhai Desai, and changed his surname to Patel after he became active in politics. His family is said to have migrated from Vaso village in Nadiad of Kheda district, a village of Patidars, where revenue clerks were known as ‘Desai’.

The family migrated to Saurashtra and ran a flour mill in Rajkot. Jana Sangh veterans like former chief minister Shankersinh Vaghela, who knew Keshubhai for 55 years, says he ran this mill in Hathikhana area of Rajkot for a living, and describes him as a “self-made” man who built the party from scratch.

Keshubhai had told this paper in an interview in 2015: “Many Patels from Amreli and Junagadh are Desais –– clerks who collected taxes from land owners and were found in the tiny state of Vaso near Nadiad and in Saurashtra. Throughout school, I was Keshubhai Desai, till our Junagadh leader Suryakant Acharya (Former BJP MP) began to refer to me as ‘Keshubhai Patel’ in public, and the name stuck”.

The changing of the surname “was largely looking at the political situation of the time”, says BJP member Yogendrasinh Padhiyar, whose father Narsinh was among BJS founders and a close confidant of Keshubhai.

In Rajkot, he went to Alfred High School, which is also Mahatma Gandhi’s alma mater. “The family also used to keep cows and buffaloes. We were one of their customers for buying milk. His wife Leelaben used to supply milk to our family,” Gunvant Delawal, president of Rajkot’s Sargam Club and a member of RSS, says.

As Chief Minister of Gujarat in 1990, Keshubhai had played a key role in the organisation of the Rath Yatra led by former deputy PM LK Advani for building of the Ram temple in Ayodhya. Following the yatra that expanded the national presence of the BJP, Advani went on to win elections from the Lok Sabha seat of Gandhinagar in Gujarat from 1991

On 12th July, 2009 Sunday, The BSNL & DoT Pensioners Association, Gujarat Circle, Ahmedabad had launched its own web www.bdpa.in to cater needs of BSNL & DoT Pensioners of Gujarat in general India in particular. Within Ten Years period, more than 1,00,00,000 viewers have visited the web which speaks of its popularity amongst the Pensioners/Workers. Our aim is to provide latest Pensioners/Workers immediately. In order to make it Pensioners friendly we have given new look to our web. It contains regular pages such as orders on IDA/CDA, BSNL Medical Rules, Name of Hospitals, Membership list, Birthday List, Membership Form, Procedure, and exhaustive information for members including vital information on 4th, 5th & 6th CPC Pay Scales. We have incorporated orders on 1st & 2nd Wage Revision in BSNL. We have membership in more than 16 Circles and have formed Circle Branch in Kolkata, W.B. Bihar, J & K, NTR, Gujarat, AP, Chennai Telephones, Tamilnadu, Kerala & Karnataka. We have more than 10000 members throughout the country. Your suggestions to make this web pensioners friendly are always well come and you can send email to didimistry@gmail.com Phone: 079-25500800 Cell: 09879090682. Please visit Magazine Page for “BSNL PENSIONERS NEWS GUJARAT” which is published quarterly by the Association from Ahmedabad. We have won Cash Award of Rs.5000/-, Certificate & Trophy in the year 2012 for our excellent work. Our 4th Bi-Yearly Gujarat Circle and 1st All India Conference were held during the period from 24.6.2012 to 25.06.2012. The Delegates/observers from throughout the country participated. Open session was held on 25.06.2012 and addressed by S/Shri K.C.G.K. Pillai, B. K. Sinha, PGM Ahmedabad Telecom District, Smt. Sujata Ray, PGM Finance, CGM Office, Thomas John K, K. Jayaprakash, Islam Ahmad and many dignitaries. BSNL Pensioners Directory 2012 – 3rd Editions released on 25.06.2012 is under distribution at concessional price. Book your copy with Shri H. C. Bhatia, Office Secretary. In Gujarat, we have formed District Branches at Valsad, Surat, Vadodara, Kheda, Ahmedabad, Mehsana, Rajkot, Jamnagar, and Junagadh and have membership in all the Districts which is unique achievement. We have established our office at Central Telegraph Office Compound, Bhadra Ahmedabad and our office remains open from Monday to Friday during 14.00 to 18.00 hours. Shri H.C. Bhatia, Office Secretary and R.C. Sharma Treasurer are available on 079-25500800 during normal workig hours. The 3rd A.I.C. of BDPA (INDIA) was held in Kerala 4th and 5th April, in Thiruvalla. S/Shri Thomas John K and D.D. Mistry were elected as All India President and General Secretary for 2019-20-21-22 There is long way to go and reach our goal of selfless service to fraternity. We look forward to receive your appreciation and guidance to go ahead. None is complete but task can be accomplished we there is a will. Thank you all once again. The web is maintained by Shri D.D. Mistry, GS BDPA (INDIA). Dinesh D. Mistry, General Secretary. 05.11.2019